Our website uses cookies for statistical, advertising and functional purposes. Thanks to them, we can customize the site to your needs. Everyone can accept cookies or have the option to disable them in the browser, so that no information will be collected.

Routes, schedules and trip planer based on the General Transit Feed Specification

In this post we would like to share our idea how we have used the power of General Transit Feed Specification (GTFS) to build a useful tools for publication and visualization of public transport routes, schedules and trip planning.   The GTFS stands for the General Transit Feed Specification (GTFS), which has been developed by Google and it is widely promoted as the open data format for public transport data. It is also used internally by Google to integrate with public transport agencies around the world. Agencies use this format widely as well. There are many sources of public transport data available as the GTFS e.g. http://www.gtfs-data-exchange.com/. The GTFS technically "defines a common format for public transportation schedules and associated geographic information GTFS "feeds" let public transit agencies publish their transit data and developers write applications that consume that data in an interoperable way".

We, in Inovatica, thought that there is a need to build fast, easy and available tools which consumes the GTFS format and presents routes, schedules and moreover make trip planning possible. So, we have decided to build such tools and named TransitArt. The underpinning idea is that everyone shall be able to use these tools in couple of minutes, the same way, as the Google make their maps available to millions of websites around the world. The output of these idea are following components:

which in details we present below. 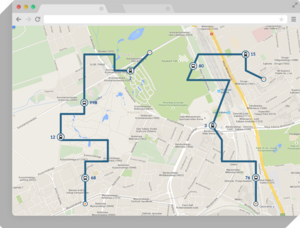 Presents every transport line and stop

Component presents the transport lines and stops, which can be sorted and viewed in the form of a list. You can easily browse timetable data and find the requested information. You can check the precise location of the stop or find out the exact route of the desired line on the interactive map.

Upcoming departures and changes from a stop

Timetables are adapted to support multiple transport agencies. Thanks to this function, you gain access to timetable data gathered from multiple public and local transport operators. 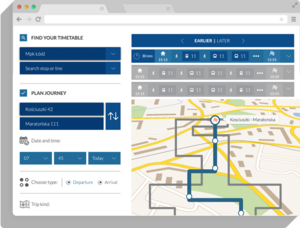 By address and points on the map

“Route planner” allows you to plan the route of your trip by typing addresses (the beginning and end of the trip) or by using the interactive map. You can also browse suggested connections by date, time, transport line or type of route (optimal, with minimal amount of changes or minimum walking).

It means that all the timetable data such as the transport lines, the arrival and the departure times and the location of the stops are consistent with data from “Routes & schedules” component and always up-to-date.

Route planning for people with disabilities

Thanks to TransitArt’s route planner, people can plan their trip using the means of transport that best suits their needs. The planner analyzes the timetable data and shows only buses and trams that are equipped to take wheelchair passengers.

TransitArt API was created in the form of resources that correspond to respective services and data. We based them on the REST architecture – a model that imposes using best practices in developing distributed applications architecture. Services are being shared in the form of resources that are related to an adequate set of parameters and reply format.

Publishing GTFS timetables in any application

TransitArt API lets you publish public transport timetables stored in the GTFS format. You don’t need to worry about adapting timetable data to your application – thanks to API you can automatically publish it wherever you want.

TransitArt allows timetables to be conveniently edited and published using the Timetable Editor. Its functions give you total control over public transportation timetable data.

TransitArt allows timetable data to be managed divided into transport lines, stops and calendar data – the dates and times of public transportation departures. This way of administering timetables is more convenient than ever and accessible to everyone.

Our Timetable Editor allows for quick exporting to/importing from the GTFS format created by Google. 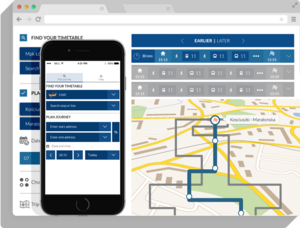 TransitArt provides the component for the mobile app for a particular public transport operator/ local authority. It contains all the most important TransitArt functions and presents timetable data to make public transport passengers’ lives easier. Every app will be adapted to the requirements and needs of a client.

Mobile app is integrated with TransitArt’s route planner module. Passengers gain a possibility to plan their trip using multiple means of public transport by entering addresses of beginning and end points of a trip, as well as using an interactive map. It also allows you to browse routes by date and time as well as by public transport line or the type of route.

TransitArt allows you to follow public transport vehicles positions, thanks to its Real-Time Trip Planner function.

It is based on GPS coordinates that tell the exact position of a vehicle and allow you to precisely calculate the arrival time.

The real-time route planner allows the user to track all the traffic congestion and changes in the public transport timetables. All kinds of accidents and roadwork which affect public transport are immediately shown on an interactive map.

Real-time route planner will give you up-to-date information about delays and show them on an interactive map. If you are interested in tools and would like to receive more information please contact us. 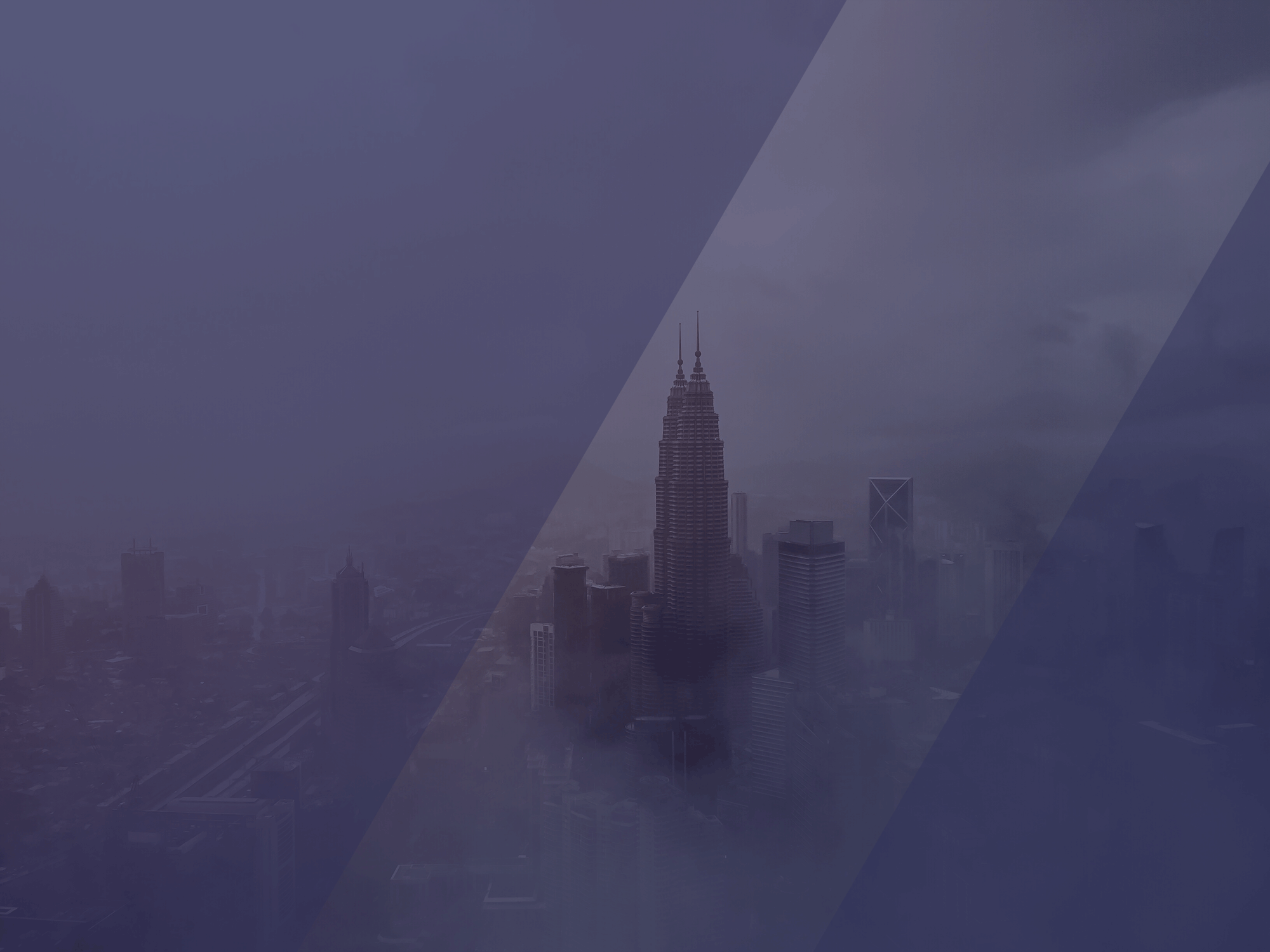 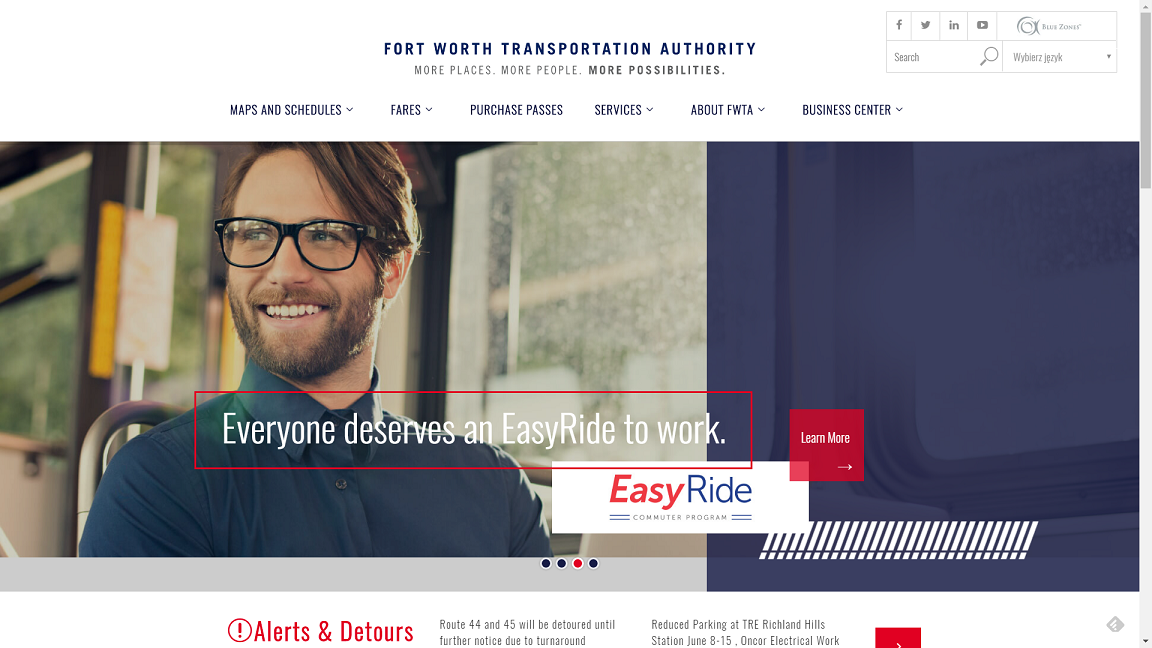